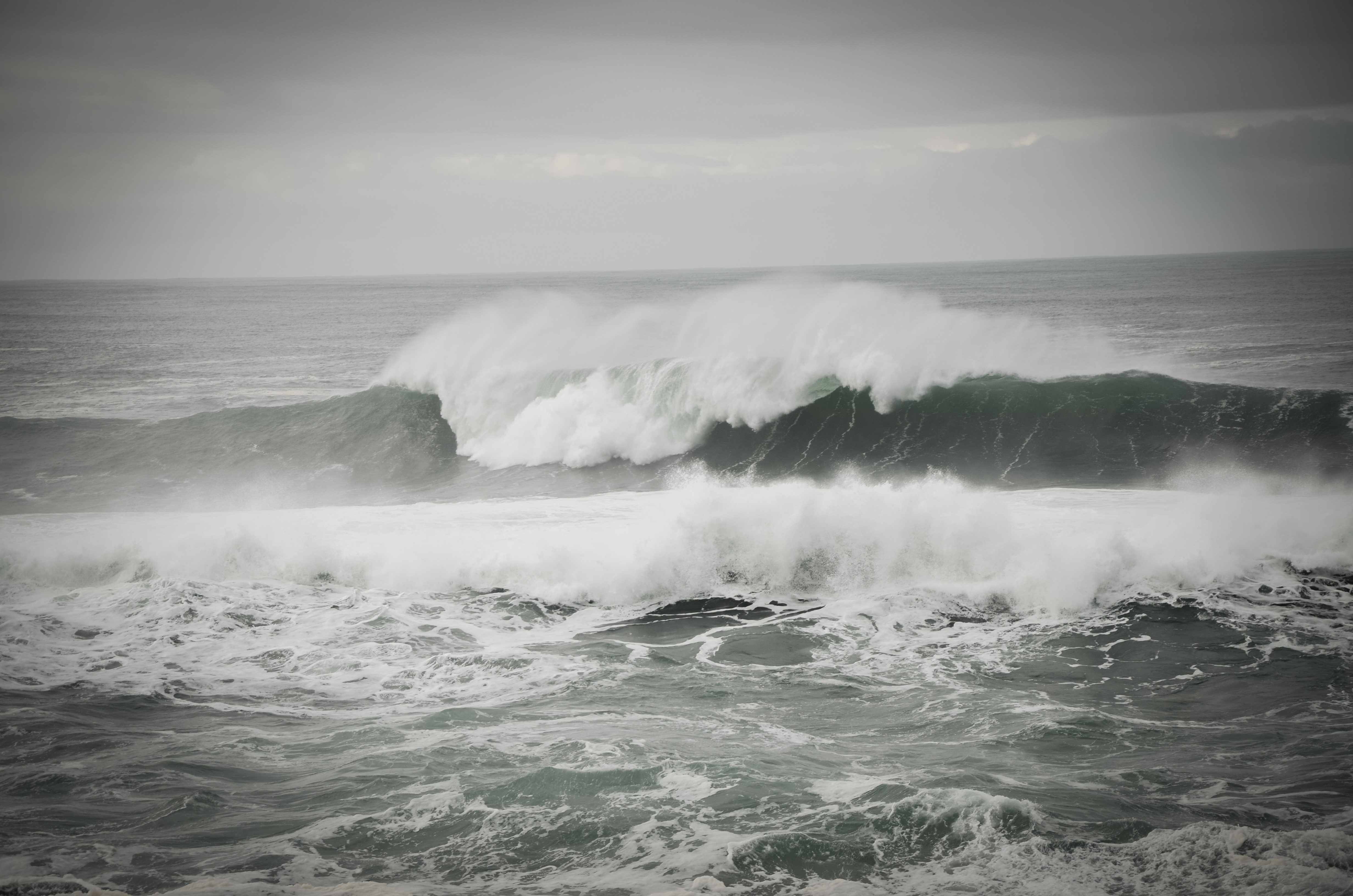 Watching waves crash can have a very peaceful, calming effect on most people… The rhythmic, circular motion of massive energy passing through enormous bodies of water manifesting as thunderous booms or tiny ripples at the sandy shoreline; for those who have never experienced them, I would recommend you give them a try. The wind, the sounds, the salt air, you’ll quickly understand what I am talking about.

This product of nature’s repetitious beauty and distinctive sounds draws people to them in droves, all while lulling them to sleep. Our society covets this resource; some of the most expensive land and homes in the world sit at the foot of the ocean; unobstructed views commanding significantly higher prices.

Its tranquility creates short memories as we often forget how its massive power can become tremendously destructive, reducing entire communities to mere ruble in the blink of an eye.

In spite of their soothing nature, I was terrified of the waves as a child, more specifically, the rip currents that lay hidden to the untrained eye; to this day causing me significant angst as I watch my 5 & 7-year-old splash in their shallows.

Those in the NY/NJ area may be familiar with Accident Park? The nickname given to the once popular, “Action Park” located in Vernon, NJ. Vernon Valley Great Gorge was the host of skiers in the winter while Action Park’s water slides, Tarzan swing and wave pool drew summer crowds in droves. It was the wave pool, which became the source of my fear of the ocean, which lingers to this day.

While stagnant, wave pools look like any other ordinary pool, their surface initially calm, almost glass like. However, once the wave making mechanism is turned on, the repetitive motion begins. Small ripples make way for larger waves; at first, the undertow is slight though with each passing wave, every aspect of the circular motion gets stronger; water is sucked in creating the undertow spitting out larger waves. The undertow increases in strength, even larger waves are produced; rinse, repeat.

For those who read these notes, you know I am a bit OCD for accuracy. I do recognize there is a material difference between “undertow” and a “rip current”, especially when being produced from a wave pool – for now, just think of both as an exceptionally strong current that can take you in a direction you don’t want to go (whether being pulled down under the water preventing you from coming up for air or out to sea away from the shore)…

I was roughly 5-6 years old and just had to be one of the first to enter the pool. At that age, my excitement got the best of me. My attention was focused on the ripples turning into larger waves (jump, jump, with each passing wave another larger jump). What I failed to recognize as a child was the undertow building in strength with each passing wave. Quickly, my excitement turned into straight up fear, as I was swiftly dragged under the surface unable to breathe.

At that age, I didn’t know what an undertow was, and I wasn’t a strong enough swimmer to fight it. Keeping my head above water was impossible regardless of how hard I tried; panic ensued. My last memory of that day was my mother screaming at a young lifeguard to help me; I reached out as far as I could, then I blacked out…

I consider myself lucky, lucky to have a parent who was watching so closely, lucky the lifeguard got to me in time, lucky to have come out of that scenario alive. From that day on, my mother forced competitive swimming upon myself and my siblings. We all became very good swimmers; I became a lifeguard and while this occurred when I was so young, I firmly believe that day so many years ago, left a lasting affect shaping me into who I am as a person today.

My wife jokes that I am a “helicopter parent” – I respectfully disagree, just hyper-aware of my surroundings; the full picture, the details (or as many of them as I can possibly identify).

And it’s why I tell you this story. My mind processes each and every situation from a risk reward perspective first; it doesn’t matter if I am driving, parenting or making an investment decision. To this day, my initial focus remains the rip current that lays hidden, the one that terrified me as child and continues to keep me on edge as my children learn to surf or merely jump the oceans waves.

As calming as the waves can be, my personality traits don’t allow me to forget their hidden dangers. It doesn’t mean we don’t go to the beach, we just spent a week in Corova, NC accessible only by a 4 wheel drive SUV with air released from their tires (think about my nerves knowing it will take 30-45 minutes just to get to a paved road let alone a hospital?!).

Understanding risk, as with most facets of life, begins with awareness; identifying and educating yourself on their characteristics. Again, we don’t stop our lives over risks, but we do respect them…

You don’t have to stretch all that much to draw parallels between the characteristics of waves and financial markets. Markets, like waves can lull you to sleep or destroy your financial future in a heartbeat if you’re not paying attention. We recognize that not all strong and powerful waves become destructive, and not all market corrections are as severe or damaging as others.

Over the last decade, financial markets have produced ripples to mediocre storm surges leaving behind more positive memories with forgettable pockets of negativity; nothing severe enough to facilitate material change.

There is a flip side… while the strength of waves is primarily generated from wind and friction, more frequently than not, the most destructive storms originate from beneath the surface, often invisible to the naked eye. For example, The Japanese Tsunami of March 2011 destroyed cities and villages more than 3 miles inland. Created by a tectonic shift in the earth’s plates (a 9.0 magnitude earthquake beneath the ocean), no one saw this happen, but it was detected by measuring tools (a seismograph). Even still, there was little time to protect yourselves from the massive devastation that hit the coastline.

Instantly and with very little warning, both waves and markets can be more destructive than most can fathom; leaving carnage in their wake taking years, at times decades to recover. Unless you study rip currents, you won’t know what to look for.

The financial markets seismograph is on and registering warnings at an alarming rate – and while I’ll take a second to apologize for the length of some of my notes, and for what some may consider to be unsettling content, I won’t ignore them. Those who experience an earthquake don’t get to pretend it’s not happening because it’s inconvenient and they have things to do.

Just like the rip currents, identifying and educating yourself on these characteristics is tremendously important for our future success. Market seismographs are talking to us, the question is, are you listening. Furthermore, if the warning signs are making you nervous, maybe you’re not set up and allocated as best as you could be?! If we don’t talk about cracks in our financial system, you are likely to be blindsided.

As discussed above, if you break down what we do here at Other Side Asset Management every day, in its most simplistic form, is weigh and manage risk vs. reward… We look for things most people aren’t paying attention to, we’ve described it as spotting cracks in the damn before the damn gives way. (or before the bottom falls out of financial markets).

While most believe they do this with their investments, history and studies prove time and time again that they don’t. Some of you have read this already but for those who have not:

“The industry preaches to stay fully invested with diversification as a means of loss mitigation. The issue is that there are few capital preservation investment strategies, such as QID’s Rotation Strategies, to protect investors from extreme downside risk. As expected, during major economic events such as the bursting of the technology bubble in 2001-2003 and the mortgage meltdown of 2008-2009 most asset classes participated in the stock market carnage. Therefore, the major benefits of diversification across asset classes failed investors when needed most.” DALBAR QAIB study page 8

In our most recent quarterly, we discuss spotting and navigating rip currents in financial markets, negative interest rates coming states side, the many warning signs flashing caution and much more…