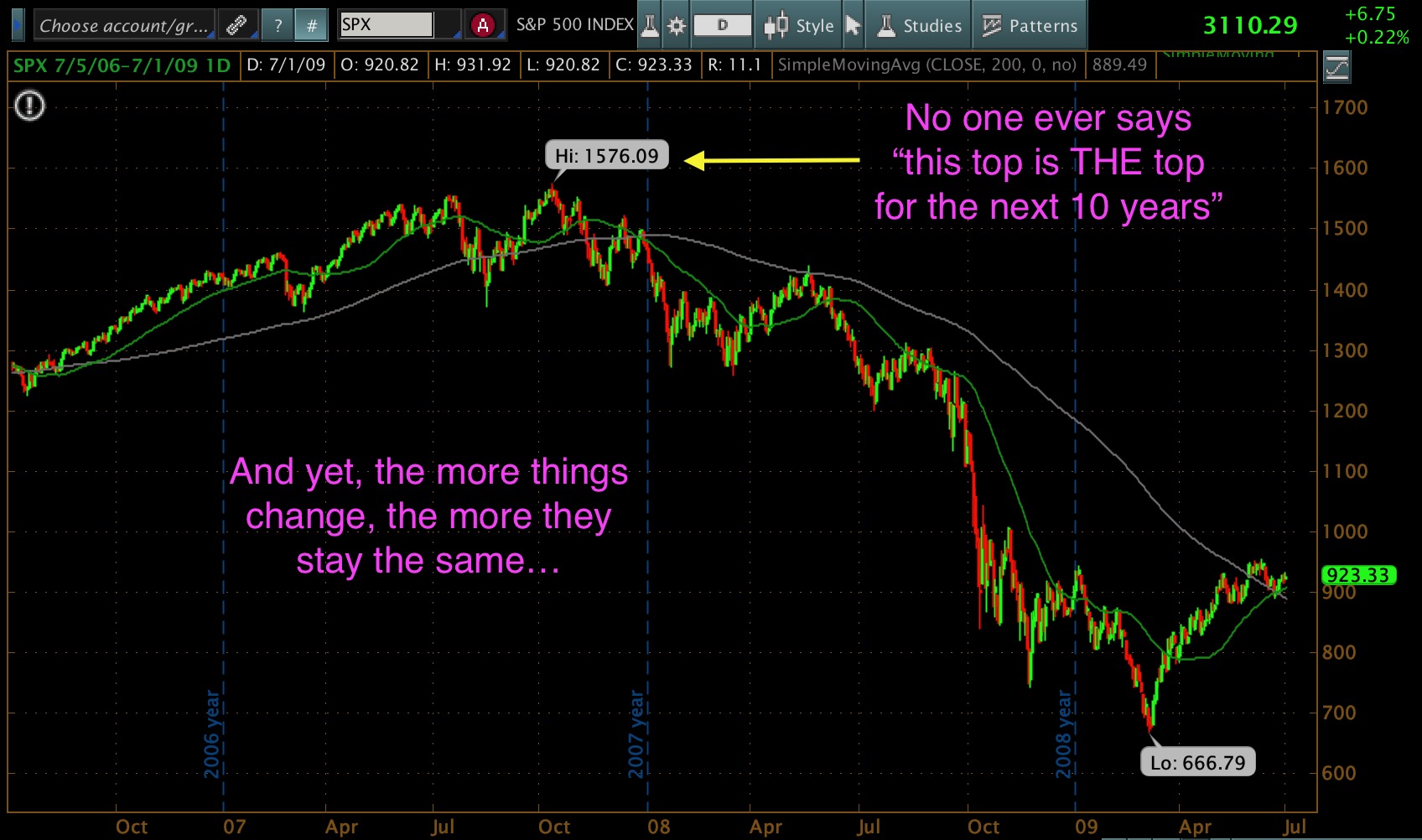 Lately, I feel like I’m on a treadmill running up hill, for as different as the catalyst which pops a bubble always is, it’s as much the same (a bubble – typically fueled by debt and overleverage) … and yet, we appear to have learned nothing. The mindset and attitudes of investors tend to be very predictable. From the onset of early conversations, I can usually predict with fairly good accuracy as to how the business relationship will progress. Certain clients become very good barometers as to the overall mood of the mob; whether, nervous or euphoric.

Those who should read this won’t and those who currently understand these concepts, will. The more things change, the more they stay the same.

“It doesn’t matter whether it (the next downturn) comes in one year or four. If you don’t start preparing now, you will maybe do better while the economy continues to do okay, but whatever gain you get from that will be overwhelmed by problems with your investments in the downturn…

“Investors should systematically reduce risk. They have to be highly diversified, and that doesn’t just mean financial assets…”

“Why do Investors need to prepare now?”

“It’s difficult to make those adjustments while the decline is underway because the liquidity won’t be there. This time the liquidity is going to be very challenging in the corporate bond market.”

The above quotes come from an October 30, 2019 interview with Jeffrey Gundlach and Swiss newspaper Finanz und Wirtschaft (translated: Finance and Economics). We encourage you to read the entire interview, you can do so by clicking here.

While we’ve said this before, we’ll repeat ourselves for first time readers. If you judge “risk management” off of a single year’s batting average, you’re missing the point. Go out and buy an ETF – the S&P, for if that’s your barometer of success, then that single item is what you should own. If your choice is to chase dreams rather than earnings growth and relative value, as we quote Gundlach above, “you will maybe do better while the economy continues to do okay, whatever gain you get from that will be overwhelmed by problems with your investments in the downturn”

Dalio has recently been scrutinized by the MSM (in the specific link, CNBC) for his comments on gold and the short term performance of his flagship Pure Alpha fund, which was down -4.9% through the first half of this year (June 30,2019). The comparison used by pundits was the S&P 500, which at the time was up roughly 18%.

While we should all welcome a healthy dose of scrutiny, making a short-term performance comparison with one of the smartest guys in the room with an “everything up” narrative, is the essence of what Dalio is speaking about; they don’t really know history and don’t understand the economics of it… They’re judging and questioning one of the all-time greats, a Hall of Famer, by looking at his one-year batting average

without considering his history, other merits or more importantly, THE WHY? WHY has one of the

greatest investors of all time positioned his Pure Alpha fund this way?! What is he seeing that has led him to make these decisions for the BILLIONS of dollars he manages for himself and others? The man doesn’t need to work; his personal net worth is estimated at $18.7 billion; he’s a philanthropist, a teacher, he’s pleading with people to learn…

The late Richard Russell began writing the well-known “Dow Theory Letters” in 1958. His most popular piece was titled “Rich Man, Poor Man (The Power of Compounding)”: The below excerpt should be put to memory. It’s timely:

In the investment world the wealthy investor has one major advantage over the little guy, the stock market amateur and the neophyte trader. The advantage that the wealthy investor enjoys is that HE DOESN’T NEED THE MARKETS. I can’t begin to tell you what a difference that makes, both in one’s mental attitude and in the way one actually handles one’s money.

The wealthy investor doesn’t need the markets, because he already has all the income he needs. He has money coming in via bonds, T-bills, money market funds, stocks and real estate. In other words, the wealthy investor never feels pressured to “make money” in the market.

The wealthy investor tends to be an expert on values. When bonds are cheap and bond yields are irresistibly high, he buys bonds. When stocks are on the bargain table and stock yields are attractive, he buys stocks. When real estate is a great value, he buys real estate. When great art or fine jewelry or gold is on the “give away” table, he buys art or diamonds or gold. In other words, the wealthy investor puts his money where the great values are.

And if no outstanding values are available, the wealthy investors wait. He can afford to wait. He has money coming in daily, weekly, monthly. The wealthy investor knows what he is looking for, and he doesn’t mind waiting months or even years for his next investment(they call that patience).

But what about the little guy? This fellow always feels pressured to “make money.” And in return he’s always pressuring the market to “do something” for him. But sadly, the market isn’t interested. When the little guy isn’t buying stocks offering 1% or 2% yields, he’s off to Las Vegas or Atlantic City trying to beat the house at roulette. Or he’s spending 20 bucks a week on lottery tickets, or he’s “investing” in some crackpot scheme that his neighbor told him about (in strictest confidence, of course).

I wonder why Warren Buffet is sitting on $128 billion?! Though, I digress… This brings me back to the Gundlach interview: when asked, Is there any place where you can find value? His response is very telling:

“Outright value? No. I don’t think there’s anything in the world of financial assets that one could call value, because the policies of the central banks have pushed valuations to levels that historically are associated with avoidance rather than allocation.”

In this Monthly we share with you the mindset of some of “the smartest guys in the room”; exploring their message and how it correlates with the consistency of our work. Finally, we will show you what the engine (and leaks) look like under the hood of the car that everyone keeps bidding the price up on. I like the way this note flows, it’s quite a few pages, but there are numerous graphs which speak much louder than words, PLEASE read it. Cycles matter, we believe we understand where we are in the cycle though, you should too.